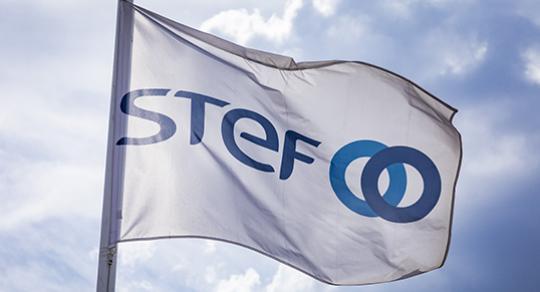 • Turnover of 3.5 billion euros (up 11.5%) and operating result of €154 million (up 32%).
• A year marked by a strong external growth momentum and the establishment of the Group in the United Kingdom.
• A strengthening of the Group's environmental commitments with its climate approach, Moving Green.

Meeting on 10 March, the Board of Directors of STEF Group, the European leader in temperature-controlled transport and logistics services for food products, approved the full-year financial statements for the 2021 financial year.

“In 2021, the Group improved its economic performance in all its countries and all its activities, thus returning to 2019 levels. The results attest to the solidity of STEF's operational and financial fundamentals and its ability to invest for the future.
The year was marked by external growth operations, with the Group having taken an important step in its development with the acquisition of Langdons in the United Kingdom.
Finally, building on the mobilisation of its teams and the collaboration with its stakeholders, STEF has formalised its climate commitments in its new Moving Green roadmap focused on sustainable mobility and more virtuous cold production.”

Change in results (in €M)

The stabilisation of the health crisis and the dynamism of consumption in Europe have enabled the Group to record an increase in its operating result in France and internationally. In the second half of the year, however, this was strongly impacted by the rise in the price of electricity.

Breakdown by region and business line

In a geopolitical context with uncertain consequences, the Group remains vigilant for the coming year. This year will be devoted to integrating its new activities in the United Kingdom and preserving its operational profitability in an inflationary environment. The Group will attach particular importance to strengthening the attractiveness of its business lines and building the loyalty of its teams. STEF will also continue to invest in energy transition.
The Board of Directors has decided to propose a dividend of €3 per share which will be put to the vote at the General Meeting on 28 April 2022. This represents €37 million in total.
Attentive to the balanced distribution of the value created, this year the Group will also pay €42 million to its employees in respect of its profit-sharing and incentive agreement and the matching contribution provided for under the international company savings plan.

The audit procedures on consolidated financial statements have been completed. The certification report will be issued after the completion of procedures required for publication of the annual financial report.